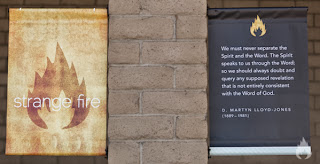 It won't have escaped the attention of either of my readers that John MacArthur is hosting a conference on the Charismatic Movement this week, called 'Strange Fire'.  If you were in doubt, the title makes it clear that he's agin' it.  By the wonders of modern technology - and they truly are wonders - we can all watch the conference 'livestream' if we choose - though for those of us here in the UK, the timing is awkward with some sessions beginning at 3a.m. GMT.  (Having said that, Conrad Mbewe is speaking at 5pm GMT today - he's always worth watching.)

What's interesting to me, as a convinced cessationist, is the reaction of some really quite sane charismatic commentators: 'MacArthur shouldn't be doing this; he's dividing the body of Christ.'  Even Adrian Warnock thinks that.  (Adrian also quotes MacArthur while ignoring the context, and then defends himself for doing so.  Even worse, one man in his comments plays the race card!  Now we know that the charismatic movement is good - anybody who opposes it is like those who oppose racial equality.  Note to anybody that's interested: THE MOMENT anybody plays the race card in a debate that's nothing to do with race, I lose all interest.  It's like wearing a t-shirt that says 'I have no valid argument to make so shut yer face.')

It's interesting that when Charismatic churches (NFI, for example) and conferences hold meetings promoting charismatic theology, that seems to be a good thing.  But let anyone speak out against it, and that's a bad thing.  Are our charismatic friends becoming like some in the gay movement - wanting to stifle all debate, expecting all those who disagree to keep silent?  Surely not.  And yet...

The claims to renewed charismatic gifts in the church are either the biggest fraud to hit Christendom since infant baptism OR the greatest blessing to the church since apostolic days.  I've no doubt which; I hope MacArthur and his fellow contributors are careful to make a good case.

One of my regular readers (hi, Martin, how are you doing?) thinks I give far too much attention to charismatic issues on this blog.  He suspects that it's evidence I'm a repressed charismatic!  (Funny - that's another tactic the gays tend to use...)  Not repressed, brethren - recovering is the word.  So, just in order to keep him happy - I'm working on a little series.  Watch this space.
Posted by Gary Benfold at 10:22 am

I am sorry to say this, but I don't like the tone of this conference at all. And I am speaking as a non - charismatic. There have been some very sweeping generalisations made, and vilification of genuine brothers in the Lord.

Yes,a reasoned case for cessationalism has been made as well, but I think that may well be lost because of the complete dismissal of everything and everybody who has the slightest association with the Charismatic movement.

Problem is, Rich, you're commenting on the tone when you've only read (negative) reviews. Surely, content should take precedence over tone anyway? I doubt if the Galatians liked the 'tone' of their letter from Paul. And many, many of the men MacArthur is critiquing are simply not our brethren, but frauds. Take a look - when it's online - at the video clips shown at yesterday's panel session.
I note you call yourself a 'non-charismatic.' Does that mean you're 'open but cautious'? That is - you believe the gifts are available but you don't want them? Or are you a cessationist - and if so,surely a case for it needs to be made. I'm not aware of any conference in the last forty years that has seriously tackled these issues, except just one at the Met Tab around 35 years ago. Charismaticism is winning the day because non-charismatics don't speak out, and when they do their 'tone' is attacked rather than their arguments evaluated. My biggest fear for this conference is not that people will be offended by the tone, but that the arguments won't be strong enough!

Thanks for your response, Gary. I have read the reports by Tim Challies and others, which are not particularly negative and largely factual.

I certainly accept that there are frauds within the Charismatic movement, but there are also some genuine brothers in Christ who have come under its influence (eg John Piper, Wayne Grudem). Whilst one may disagree with their continuism, you can't deny that they are godly people who have been greatly used by the Lord. I am sure that there are others too.

I think the distinction is being made in the wrong place if it is between "Charismatic" and "non - Charismatic." It should rather be between those who take God's Word seriously and want to live by it and those who do not. If there are some who do take it seriously and come to a different conclusion on cessationism, then they should not be vilified. Those who deserve censure are those who disregard Scripture and rely completely upon their experience. A distinction needs to be made between the two.

Personally, I am open but cautious - I was persuaded by Dr Lloyd - Jones' teaching. There is no way you could accuse him of being Charismatic, but he would have come under fire from Mc Arthur because of his non - cessationism.

In terms of arguments, I read the report on the session by Steve Penningtom. To me that was a calm, reasoned defence of Cessationism. Whilst I did not agree with it all, he deserves respect for the tone of what he said, he was far more gracious than others,and therefore would be more persuasive.

Lloyd-Jones' attitude to 'the tongues movement' was not 'open but cautious' - see Murray's recent update (and abbreviation) of his biography. It's a shame Lloyd-Jones gets quoted in support, just because of his views on Christian experience. (I share his views on Christian experience - more or less.) And neither I nor JMac deny that Piper and Grudem are brethren - they've both spoken for JMac at the Master's Seminary I understand. BUT their views are still (in my opinion) wrong on these issues and should be critiqued - not least because of the 'cover' they give to so many others.
Don't be 'open but cautious'. If you think God is giving 'the gifts' today, seek them. If you don't, say so. Remember the guy in the American Civil War who registered his protest by wearing 'Northern' jackets and 'Southern' trousers; both sides shot him!

When I say open but cautious, I don't believe that one should go "seeking" the gifts, or going to some meeting to receive them. If God sovereignly chooses to give someone a gift then praise him for it and use it. I don't believe we should seek gifts that God hasn't given. He hasn't given me the gift of tongues, and I am not looking for it. Neither do I attend a church where the "supernatural" gifts are used.

As regards Piper and Grudem, I don't doubt that John Mc Arthur regards them as brothers. And it is quite right to critique their views. However, it seems to me that in this particular conference their ilk are being lumped together with every false teacher. Surely there is a distinction that needs to be made.

I take your point about Lloyd - Jones too. I don't think that Charismatics can claim him as one of their own or even to justify themselves. However, it seems that even his views would be open to criticism at this conference.

The Gospel Coalition has, as ever, provided a calm, level headed response. This, in my opinion, strikes exactly the right note.

Thanks for the link, rich612. It's a good article, as I would expect from Thabite. As you say, the tone is good. But - the content is something I can't agree with. I don't believe the Bible is as unclear on this as Thabite is trying to say. Suppose we talk about the deity of Christ; the Jehovah's Witnesses and the Christadelphians are very clear about sola Scriptura. So do we say 'since equally sincere people believe opposite things, we must conclude that there's a need for more humility and less dogmatism'? No, I doubt it! Blessings to you.

With respect, Gary I think it is a different issue. I don't think you can call Christadelphians or Jehovah's Witnesses in any sense Christian, whatever they may claim. I do believe that, despite what Dr McArthur says that many Charismatics are genuine believers. I know a number here in Ireland. If I were to name 10 of them, would I be prepared to say that 9 of them were not Christians? Certainly not. They are genuine brothers and sisters in Christ. Furthermore, many of them have been at the forefeont of arguing for the penal substitution of Christ against the liberal tide. No way could I deem 90% of them unsaved!

I agree with your conclusion. Of course. (You may like to see some of my other posts on charismatic issues.) it's the logic I'm quibbling with.